Read the latest news from the Hereford Times… 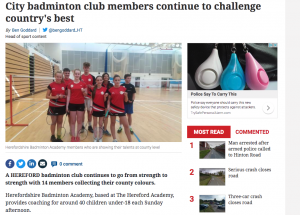 A HEREFORD badminton club continues to go from strength to strength with 14 members collecting their county colours.

Herefordshire Badminton Academy, based at The Hereford Academy, provides coaching for around 40 children under-18 each Sunday afternoon.

The Academy opened its doors after a summer break with a special presentation of Herefordshire County Colours to 14 players this week.

All have represented Herefordshire on four or more occasions, often playing two age categories higher than their actual ages

Rachel McGill, club chair said: “Herefordshire junior badminton has never been more successful and we currently have four players in the top 20 of their national age group, all competing in national tournaments across the country.

The club is thriving and also run national tournaments.

“We are however always trying to recruit new members.”

Currently Chad Warren, from John Masefield High School, is ranked 16th in the under-18 age category in the country.

Joe Howells, from Whitecross Hereford High School, is ranked 20th at under-17 level.

Chloe Barton, from the Chase High School in Malvern, is ranked 19th at under-16.

Meanwhile, Hattie Herbert, from Bishop of Hereford’s Bluecoat School, is ranked 12th at under-14.

McGill added: “Some of our older members are now at university representing teams in national leagues and others are now Level One coaches, helping us to bring on the next generation of talent. “All this from a county who’s entire population is fewer than some of the towns in the counties with which we compete.

“We are open to children as young as six years old and play every Sunday at the Academy School between 3.30pm and 5.30pm.”

Anybody interest can contact the club at: herefordbadders@gmail.com to book a place for your child.

We did it again today!! “The best junior tournament in the calendar - well organised fun and supportive” WELLDONE to the organising team. Come to our last one of the season- U17 Herefordshire Bronze - closes Monday - ENTER!!!!!

Come down to the Academy School in Hereford to watch some brilliant U19 badminton today in the national bronze competition. Grab a toastie while you’re here and support Herefordshire badminton